Home / World / 'Trump-xtc from the Netherlands sold in United Kingdom' 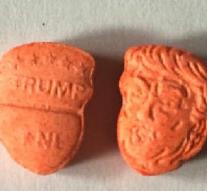 london - In the British nightlife, xtc pills with Donald Trump's image have appeared. That reports British media Monday. The tablets should be Dutch and contain a substantial dose of active ingredient MDMA.

The pills are orange, presumably inspired by the American President's hair color. According to The Sun, drugs on the darkweb are available for eight pounds (about 9 euros) each.

Last month, the English police still warned of the dangers of xtc pills in the colors of the Swedish resident Ikea.