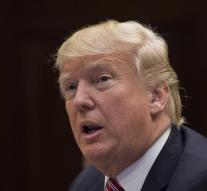 paris - US President Donald Trump travels to France for the celebration of the national holiday on July 14th. Trump has accepted an invitation from his French colleague Emmanuel Macron, reporting the French and American governments.

The planned visit is seen as a sign that the countries want to tighten up, although they have previously hit climate change. The White House stated in a statement that Paris and Washington want to expand cooperation, including in the fight against terrorism.

After the United States, France is making the biggest contribution to the coalition fighting against Islamist state in Iraq and Syria. Trump is also invited to visit Britain, but no date has been set for that visit.

Not all French are waiting for a visit by the American president. 'He is not welcome here. That's clear, 'said the left-wing former presidential candidate Jean-Luc Mélenchon in a radio interview.