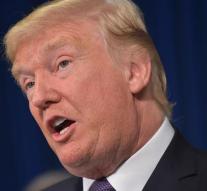 washington - From the latest Tweet of President Donald J. Trump it can be deduced that he himself believes that he has already succeeded in his mission to make America again.

In the (US) morning, the United States President sent a message via Twitter to the world in which he reported that the stock market has reached record highs and that unemployment is at the lowest level in sixteen years.

'The business and industrial enthusiasm is at the highest level for decades,' said Trump.