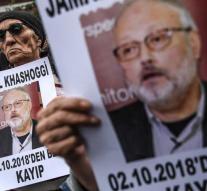 washington - US President Donald Trump says he will 'severely punish Saudi Arabia' if the Saudi journalist Jamal Khashoggi is murdered in the Saudi consulate in Istanbul. That said in an interview with the station CBS.

Khashoggi, a fierce critic of the Saudi ruler Crown Prince Mohammed bin Salman, entered the consulate on October 2 to arrange papers for his upcoming marriage. He has never been seen again. The journalist lives in the US and works for The Washington Post.