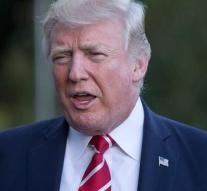 washington - US President Donald Trump does not believe that his foreign minister Rex Tillerson has called him a 'moron', a randdebiel. 'I think it's fake news,' he responded Tuesday in an interview with Forbes magazine. 'But if he has said that, then we have to compare our IQ tests. And I can tell you who will win. '