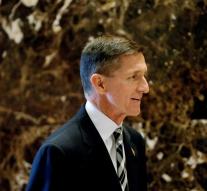 - The future US president Donald Trump has former General Michael Flynn asked for the job of national security adviser. Reported that an employee from the team around Trump.

It is not known whether the former general who Trump had advised earlier during the presidential campaign, the course has officially accepted.

Flynn, who served 33 years in the army, was appointed in 2012 by President Barack Obama as the head of the Defense Intelligence Agency (DIA), the intelligence service of the US armed forces. In 2014, he relinquished the post. Since his retirement Flynn has become a critic of the Obama administration.

The retired general has also been mentioned as a possible defense minister, but would they must first get permission from Congress.