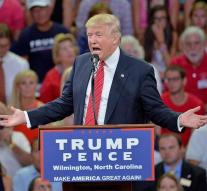 - Nearly 20 percent of all registered Republicans in the United States wants Donald Trump withdraws from the battle for the White House. Among all voters, that percentage rises to 44 percent. This enables Reuters Wednesday based on an opinion poll.

The poll is a reflection of the huge gap created by Trump's candidacy in the Republican Party. Nearly 63 percent of respondents have a negative view of Trump. The controversial property tycoon rolls from one scandal to another. On Tuesday Trump seemed to hint that proponents of gun ownership to prevent Hillary Clinton appoint progressive judges.