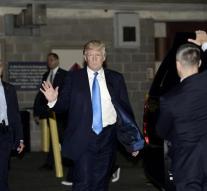 alexandria - US President Donald Trump visited a member of parliament, Steve Scalise, who was shot earlier today. Scalise is still in critical condition at the hospital and has to undergo several operations, reported the hospital.

Scalise broke several bones, injured his organs and lost a lot of blood. According to Trump, Scalise is bad and he called on Twitter to pray for him.

The Republican Scalise was shot on a baseball field in Washington, Alexandria near Washington. Four others were also injured by bullets.

The perpetrator is 66-year-old James Hodgkinson, who fought against social media and Trump and other Republicans. He passed away after he shot himself.