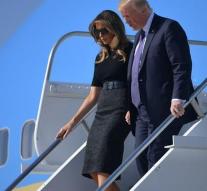 las vegas - US President Donald Trump arrived in Las Vegas on Wednesday, where he will talk to emergency workers and survivors of the shooting.

A shooter opened the fire on a crowd of festival goers from a hotel on a Sunday. At the attack- the largest ever in the United States- 59 were killed and more than 500 injured.

Trump was in the company of his wife Melania. He called the attack earlier 'an act of pure evil'.