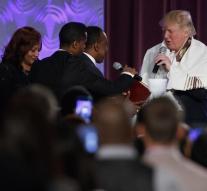 - US presidential candidate Donald Trump on Saturday visited a church frequented mainly by blacks in the city of Detroit. He turned for the first time in his campaign directly to African Americans.

In a speech to the congregation of the church Great Faith Ministries declared the Republican the African-American church for centuries,, the conscience '' is part of the US,, The African-American religious community is one of the greatest gifts that God America and its people gave, '' he said. He spoke more than ten minutes and also made a selfie with the congregation.

Outside the church protested opponents of Trump.,, No justice, no peace, '' they chanted.