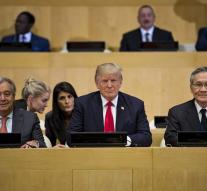 The World Organization's budget has increased by 140 percent since 2000 and the number of employees has doubled since then, said Trump Monday in New York at a UN reform meeting.

'The results do not match these investments,' added Trump. According to United States Ambassador to the United Nations, Nikki Haley, 128 of the 192 member states have signed a political declaration of intent before the meeting. It urges UN Secretary-General António Guterres to 'increase transparency and predictability of the resources needed' in the organization. 'Change is urgently needed,' said Haley.