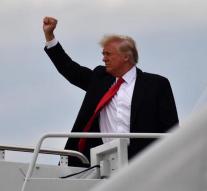 washington - In all consternation about North Korea and his rocket and nuclear bombs, President Trump announced in November to visit South Korea, Japan and China. The US president may also take Vietnam into his itinerary.

Trump is keen to visit China because he still gives that country a key role due to the contact with North Korea. Beijing should, in particular, do something about the nuclear program of the regime of dictator Kim Jong-un.

Trump announced Thursday that he also had an invitation to attend the ASEAN meeting held in the Philippines. The ASEAN is a cooperation agreement in the field of culture and economics of ten countries in Southeast Asia. The organization is conducting consultations with the United States on the Philippines this month.