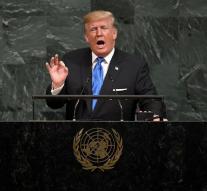 new york - President Donald Trump warned Tuesday that the US might be forced to 'completely destroy North Korea' if that country does not bind.

The US president called for a United Nations speech to isolate the regime in Pyongyang until its 'hostile' behavior ceases.