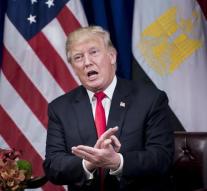 new york - President Trump of the United States announced extensive sanctions against North Korea before Thursday's meeting with the leaders of South Korea and Japan.

He made his statement in New York, where he, as well as the other leaders, attends the United Nations General Assembly.

Moon made a little more cautious before the meeting. He is based on a 'stable' treatment of the crisis, he said. Peace must not endanger.