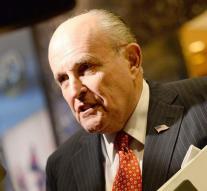 - Upcoming US president Donald Trump talks Tuesday with party colleague Rudy Giuliani on the post of foreign minister in his future cabinet. That explained a member of his transition team.

Giuliani, the former mayor of New York and loyal ally of Trump. Earlier, Trump even spoke with the former presidential candidate Mitt Romney on the important post. After that interview was announced that Trump advisers had recommended better not to go into business with him.