Home / World / Trump: Talking with rocket man is a waste of time 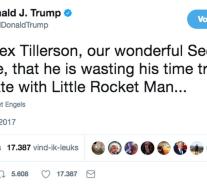 washington - US President Donald Trump calls it 'waste of time' to seek advancement to North Korea. 'I told Rex Tillerson, our great minister of foreign affairs, that he wasted his time by trying to negotiate with the small rocket man,' wrote Trump on Twitter.

Small rocket man is the nickname Trump used for North Korean leader Kim Jong-un. The president called his minister in a tweet not to put up too much time in joining diplomatic ties with the regime in Pyongyang. 'Save your energy, Rex. We will do what is necessary, 'twittered the president.

Tillerson confirmed Saturday that attempted dialogue with North Korea. His department reported later that Pyongyang has not shown an interest in talking about its nuclear and rocket program so far.