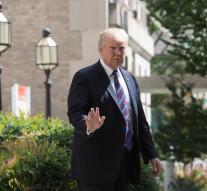 washington - President Donald Trump wants to lift the protected status of hundreds of thousands of immigrants who have illegally entered the United States as a child. He announces his decision on Tuesday, but wants to postpone the execution for six months.

He would like to give Congress the opportunity to give the young immigrants a legal basis. That reports American media, including the Politico and CNN channel, based on initiates.

It is estimated that 800,000 are sons and daughters of illegal immigrants taken by their parents as a child to the US. They grew up there and went to school, work and pay taxes and have no other country of origin. Trumps predecessor Barack Obama gave these dreamers (dromers) a residence permit in 2012 by decree.

Ten US states want Trump to put an end to this and have threatened to step to court if this does not happen by Tuesday. Many Republicans in Congress encounter such a drastic step towards the chest. However, Trump is under pressure to satisfy conservative voters whom he has promised vigorous measures against illegal immigration. With postponement of the performance he will return the ball to Congress.