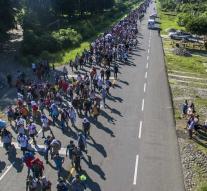 washington - US President Donald Trump will stop or significantly reduce the 'massive' financial assistance to the Central American countries of Guatemala, Honduras and El Salvador. He told that via Twitter.

According to Trump, the three countries are apparently unable to prevent people from leaving their country and illegally coming to the United States. The American president called the caravan migrants from Central America to the US 'a national emergency. '