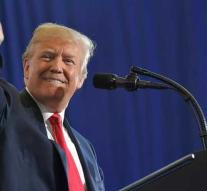 manchester - President Donald Trump gave the go-ahead in a speech in Manchester for a campaign to end the unbridled swallowing of heavy painkillers in the US.

The use of morphine-like agents such as oxycodone and fentanyl has become an epidemic. Trump proposed, as expected, to introduce the death penalty for drug dealers and not only for traders in cocaine and heroin.