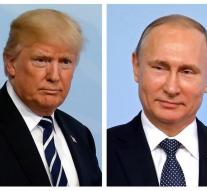 washington - US President Donald Trump and his Russian ambassador Vladimir Putin had a second interview on July 7 at the G20 summit in Hamburg. An official of the White House confirms the meeting of the world leaders, which took place after a formal discussion earlier that day, lasting over two hours.

The second conversation was during a dinner by the government leaders. Half past dinner Trump left his chair and took place next to Putin, where the two spoke in front of only a Russian translator. According to the White House because the American interpreter did not speak Russian. The official speaks of 'just a short conversation' and does not want to call it a meeting. It is not known what has been discussed.

The first personal conversation between the leaders and their foreign ministers would take about half an hour, but went a long way.