Home / World / Trump: Something else can happen around 'Paris' 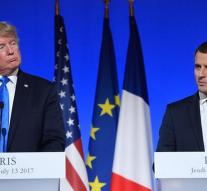 paris - There is still something 'happening' around the climate treaty of Paris. That said US President Donald Trump said on Thursday at a joint press conference with his French colleague Emmanuel Macron. Trump seemed to suggest that he could change his mind about the agreement, where he wanted to withdraw his country.

'Something can happen about the Paris treaty,' said Trump. 'Let's see what's happening. But there we are talking about the coming period. When it happens, that's beautiful. Otherwise, it's fine too, 'he said in Paris against the gathered press. The president did not detail in detail what he meant exactly.

The president announced earlier this year to withdraw his country from 'Paris' because the climate agreement would be negative for US business. His host Macron emphatically supports the agreement. He called on US environmental scientists to work in France earlier.