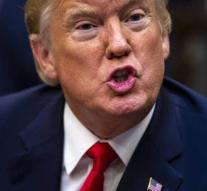 washington - Donald Trump has given a sneer via Twitter to John Kerry, the former secretary of state under Barack Obama and the loser in the fight with George W. Bush in 2004, and to other Democrats who are reportedly hot on the presidential election of 2020.

'I see that the father of the now-canceled Iran deal is thinking about throwing the presidency. That would be nice- although the field that is currently gathering is already looking very good- FOR ME !. '