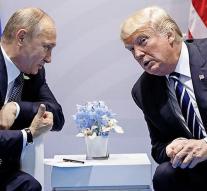 amsterdam - US President Trump discussed the possibility at the G-20 summit in Hamburg with President Putin to jointly set up a cyber unit to prevent the hacking and influencing of elections.

US security services have been convinced that the Russians have tried to influence recent US presidential elections, including hacking email addresses from the Clinton team and spreading fake news.

The idea of ​​Trump was immediately swept away by members of his own party. 'It's not the stupidest idea I've ever heard, but it's coming close,' said the influential Republican senator Lindsey Graham.

Trump said on their own two-hour interview in Hamburg repeatedly asking Putin whether Russia tried to influence the US elections, which denied Putin. According to the Russian Foreign Minister Lavrov, at the interviews, Trump said to deny Putin's denial, which was later confirmed by Trump himself.

In Russia, it was very encouraged to respond to the summit between Trump and Putin. Previously, expectations on the Russian side were low. But after the summit, all kinds of politicians were lyrical about the result, which Trump had already titled as 'huge'.

Konstantin Koschiev, head of the International Relations Committee for the Russian Senate, stated the meeting as a breakthrough. 'I have to admit that the results have exceeded my expectations, and not just those of me,' Kosichev said.

The responses in the US were a lot less positive. Masha Geffen, a leading Russia expert, said in The New York Times that Putin had got anything from Trump without anything to do whatever he wanted.

She points out that for the first time in 40 years a US president has failed to address the abominable state of human rights in Russia. And the invasion and annexation of the Crimea remained critical. The same goes for the war in Ukraine.