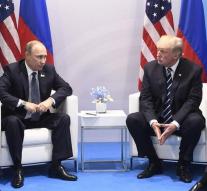 washington - US President Donald Trump and his Russian ambassador Vladimir Putin want to work together for cyber security. At the G20 summit in Hamburg, they talked about the possibility of creating a service that has to counter cyber attacks, according to Trump in a tweet on Sunday.

The service should pay particular attention to hacking attacks during elections. According to Trump, it is time to 'work together with Moscow'.

The ruling of Trump is remarkable, as the United States assumes that Russia would have mixed in the presidential elections last year. The Kremlin has always denied that the hackers have used to politically damage Democratic presidential candidate Hillary Clinton.