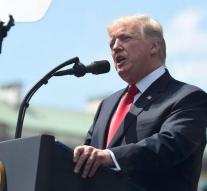 warschau - US President Donald Trump repeated Thursday that the United States is willing to defend their NATO allies. 'The US has not only demonstrated in words but also in actions that we are in favor of Article 5,' he said during a speech in Warsaw.

Trump visited the Polish capital before heading to the G20 summit in Hamburg. He received a warm welcome in Poland. According to the police, about 15,000 people were up to welcome the president. They included American flags and t-shirts with American colors.

The US president appeared to take his second official visit to Europe to reassure allies. During a previous visit to the NATO headquarters, Trump had failed to support the mutual assistance obligation under Article 5 of the NATO treaty in so many words.

This time, Trump repeatedly reiterated Article 5, although he stressed that many European countries did not spend much on defense than agreed in NATO. Poland received a compliment because it complies with the 2-percent standard.

Trump also spoke with leaders from central and eastern Europe who fear that Russian President Putin tries to regain the influence Moscow had at the time of the Soviet Union to far beyond the Russian borders. Trump spoke of 'destabilizing Russia' and invited Moscow to join 'the community of responsible countries in our fight against common enemies and the defense of civilization.'

The American president meets his Russian official on Friday in Hamburg in the margin of the G20 conference.