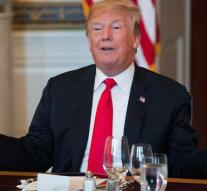 seoul - South Korean President Moon Jae-in and US President Donald Trump meet Tuesday at the Washington White House. The main topic for discussion will be the upcoming summit between Trump and North Korean leader Kim Jong-un on June 12 in Singapore. Moon and Trump want to do everything possible to let that meeting continue and make it a success.

North Korea showed a change of tone last week. Pyongyang interfered with the latest American military maneuvers with South Korea. North Korea sees that as a provocation. The US emphasizes that the military exercises are purely defensive in nature.

North Korea also said that the country has no interest in a summit meeting with the US when it comes to the 'one-sided' requirement that the Pyongyang regime give up its nuclear weapons arsenal.

On Sunday, Moon and Trump spoke each other by phone. Then they also exchanged views on North Korea's recent reactions to the forthcoming summit.