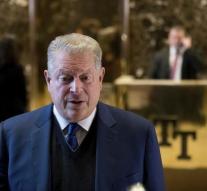 - Climate activist Al Gore on Monday ' a long and very productive 'conversation had with Donald Trump. He was in New York along with Ivanka Trump, but spent most of his time with her father, the president-elect. ' It was a sincere quest for points of agreement, '' said Gore. ' I found it a very interesting conversation, to be continued. ''

Gore (68) was Vice President under Bill Clinton. In 2000 he was a presidential candidate himself, but he then lost narrowly by George W. Bush. Since then he has committed to climate protection. His film 'An Inconvenient Truth' won two Oscars. He later received the Nobel Peace Prize along with the Intergovernmental Panel on Climate Change.

Trump has repeatedly expressed doubts whether the climate is changing through human intervention. During the campaign, he said he would withdraw from the Climate Paris. A few days ago he said that the climate might still be influenced by people.