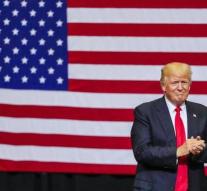 washington - US President Trump has asked two senior directors of intelligence services to publicly deny that Russia has interfered with the US elections. That's what the two have said about special prosecutor Robert Mueller, CNN reported on the basis of anonymous sources.

The two saw Trump's request as a suggestion and not as an order. However, the directors found the conscious maintenance with Trump 'strange and uncomfortable'. It is about the head of the NSA and the head of intelligence services in general.