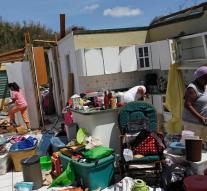 washington - The American island of Puerto Rico, according to President Donald Trump, is 'seriously in trouble' now Hurricane Maria has inflicted enormous damage. Trump wrote in a series of tweets that a solution must be found for the billion debt that the local authorities face.

'Puerto Rico, already struggling with broken infrastructure and a huge debt, is in serious trouble,' concluded Trump after the crossing of Maria. 'A large part of the island has been destroyed and they face billions of dollars in Wall Street and the banks. 'According to Trump, a solution must be found for that debt, which amounts to tens of billions of dollars.

The president indicated that the supply of food, water and medicine currently has the highest priority. 'That's fine,' he said. A large part of Puerto Rico, where about 3.4 million people live, were still without electricity for five days after the storm. In the meanwhile, the islanders are facing a new crisis: a large dam is threatening to collapse.