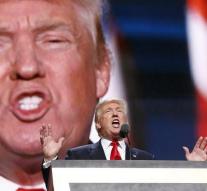 cleveland - With promises of security and safety Donald Trump has accepted the Republican nomination for president Thursday. At the convention of the party in Cleveland, he announced that,, the crime and violence that plague our nation will soon come to an end. ',, From January 2017, the security will be restored, '' said Trump.

The Republican candidate said that it was done with political correctness and promised to tell the truth.,, USA, USA, '' chanted the crowd, then Trump attracted fiercely against the policies of current President Barack Obama and his Democratic rival Hillary Clinton.

He painted a black picture of a country that suffers from crime and poverty.,, President Obama has doubled our national debt to over 19 trillion dollars. But what is the result? Our roads and bridges are falling apart, be our airports in Third World state and 43 million Americans use food stamps. ''


Trump spoke harsh words about Clinton, whom he blamed for,, terrible crimes '', referring to the storage of confidential emails on her private server at the time of her ministry. Its reign on Foreign Affairs has just passed under the Republican candidate to,, death, destruction and weakness'. Trump suggested that Clinton blame for the rise of IS, the chaos in Iraq and Libya, the Syrian civil war, the unrest in Egypt in recent years and the fact that Iran according to him, is still on the way to a nuclear weapon.

Trump presented a more isolationist alternative:,, Americanism, not globalism, our motto will be. '' In the regime changes he sees nothing but the fight against IS continues.,, We will defeat the barbarians of ISIS ' 'Trump who himself also said in domestic terms raised as a protector of the people against the powerful,,'.,, No one knows the system better than me, '' said Trump.,, Therefore, I can only fix it. ''