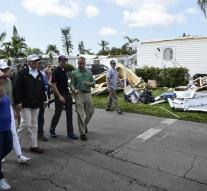 miami - President Trump has promised Florida all the support in the reconstruction after the ravage that Hurricane Irma has inflicted on the state. 'We are 100 percent for you. I will return here several times. '

The American leader visited the affected state on Thursday. It's the third time in three weeks that Trump visited one of the states hit by a natural disaster. He flew earlier to Texas and Louisiana. The three southern states have together to regret more than one hundred dead. The material damage amounts to at least 135 billion dollars (114 billion euros).

By helicopter, the president included Fort Meyers and Naples on the west coast of Florida.