Home / World / Trump prepared to respond to oath on Comey 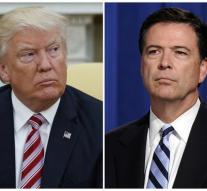 washington - Donald Trump is willing to respond to the statements of former FBI boss James Comey. Who said Thursday before a Senate Commission that the president had attempted to overtake the investigation of Russian contacts from former security advisor Michael Flynn.

'I did not say that,' said Trump to journalists in Washington. On the question of whether he wanted to give his read of the events under oath, Trump replied '100 percent'.