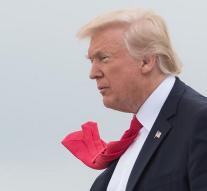 washington - US President Donald Trump is prepared to sign a renewed sanctions package against Russia, Iran and North Korea, which the Senate agreed to on Thursday. That has reported the White House on Friday.

The package of measures was adopted by 98 votes to two in the Senate. However, Trump has objections to the sanctions and especially those against Russia. He hoped to improve relations with the country. Trump could also express his veto on the proposal, but the expectation was that there was enough support in both rooms to overthrow.

The bill passed by the Senate does not offer Trump the possibility of removing sanctions on its own. This requires green light from Congress. Russia, in turn, imposed diplomatic sanctions against the United States on Friday. For example, the number of US diplomats in Russia should be reduced.