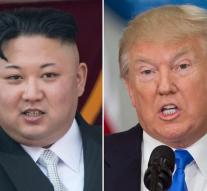 washington - US President Donald Trump praises North Korean leader Kim Jong-un because he has postponed a decision on a possible attack on Guam Island.

The US President announced that if Kim had taken another decision, 'it would have been disastrous and unacceptable.'

Last week, North Korea knew that it was an attack on the American island of Guam in the Pacific Ocean. Kim announced Tuesday that he would postpone the decision on the attack.