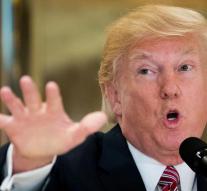 new york - President Donald Trump maintains that the violence during the protests in Charlottesville came from both sides. In the city of Virginia, it became a hard confrontation between white racists and leftist protesters, with one dead as a result.

On Saturday, Trump said that violence came from 'many sides', which came to him on a storm of criticism from Democrats and Republican partymen. On Monday, Trump seemed to turn around and condemned strings such as the Ku Klux Klan, neo-Nazis and white racists in sharp words. In the meanwhile, the White House had already tried to help Trump's words. On Tuesday, Trump said that left-wing protesters in Charlottesville went to the racists.

Trump continued to know that he understood the right-wing protesters who protested against removing a statue of Southern General Lee. 'Are the statues of slave owners and former presidents George Washington and Thomas Jefferson now also gone?'