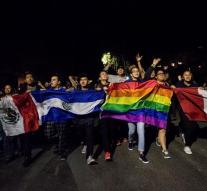 - In several cities in the US state of California are opponents of Donald Trump took to the streets after it became clear that the Republican has won the presidential election. Los Angeles marched approximately 1,500 people Wednesday morning (local time) on the campus of UCLA.

Oakland demonstrators threw a window at the Oakland Tribune newspaper. They crossed garbage containers, tires and a Trump doll on fire. San Diego and Santa Barbara, hundreds of people took to the streets to express their dissatisfaction with the election results.