Home / World / Trump : only the thugs had weapons 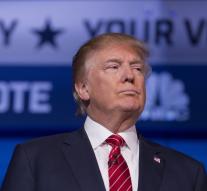 - The attacks in Paris had turned out differently if city residents were allowed to carry weapons. It thinks at least US presidential candidate Donald Trump, who denounced the strict gun laws in France after the massacre.

" None had weapons except the bad guys ", Trump said, according to US media. " If our people had weapons, if they had permission to wear, it was a very different situation been ", said the businessman, who generally do not shy away from controversial statements.

Trump came after the attack on Charlie Hebdo all with a similar message. He called it when Twitter " interesting " that the tragedy took place in a country with strict gun laws. That message Friday resurfaced and could, according to CNN count on an angry response from the French ambassador, who apparently thought that Trump responded to the attacks on Friday.

Ambassador Gerard Araud called Trump on Twitter a " vulture " and his message " disgusted by the lack of human decency ". The tweet was later removed.