Home / World / Trump: Only one thing works with North Korea 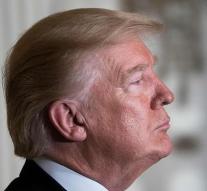 washington - US President Donald Trump has again expressed in loud terms about North Korea. According to him, 'only one thing works' against that country. What he meant by that he left in the middle.

'Former governments have spoken for 25 years with North Korea, signed agreements and paid large amounts of money... Has not worked ', Tweeted Trump. According to the president, 'agreements were violated even before the ink was dried up and the American negotiators were put in a hurry. '