Home / World / Trump: Obama is the founder of IS 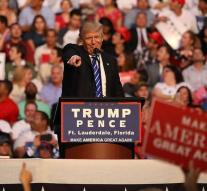 'He is the founder of IS,' he gave a cheering crowd in Florida for to repeat the then three more times. 'I would say that the co-founder of the false Hillary Clinton. 'During his speech, in which he also talked about the crisis in the Crimea, Trump also emphasized the second name of Barack Hussein Obama.

Trump expressed previously criticized Obama and Clinton, who was foreign minister between 2009 and 2013, because of the way the United States ended the war in Iraq. According to Trump led to the withdrawal of US troops to the formation of militant groups.


In an interview with CNBC Trump repeated his accusation of Obama. 'He was the founder of IS. And she. I mean, I call them co-founders, 'he said. 'He should not have gone that way from Iraq. It was a disaster. '

About the criticism he received in his statement he was short: 'Is there anything wrong with saying so. Why do people complain that I said that? I tell only the truth. '

Obama was against the war in Iraq and pledged during his campaign for the presidency in 2008 that he would put an end to. In 2011, the United States withdrew their troops from the country.


Islamic State had its roots in the rebellion of Al Qaeda that emerged after the US invasion in 2003. In 2014, the group called a caliphate in Syria and Iraq.

Recent opinion polls show that Trump rapidly losing ground on Clinton in the race for the presidency.