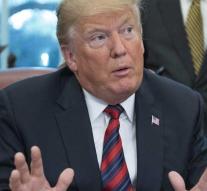 washington - President Donald Trump has admitted that there is no evidence for his claim that Middle Eastern terrorists are among the migrants moving from Honduras towards the American border. However, he accused Venezuela and not named 'leftist groups' of encouraging the so-called caravan.

Trump tries to make immigration a central theme of the mid-term elections in early November. They determine whether the Republicans keep control over the Congress. The president is very outraged that a group of thousands of migrants are slowly moving north from the Mexican border with Guatemala.