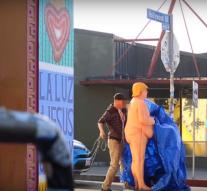 - A statue of a naked Donald Trump has produced at an auction in Los Angeles converted 20,000 euros. A portion of the proceeds from the auction go to an organization dedicated to immigrants. Whose generous amount for the naked Trump resigned, is unknown.

The separate work of art was created by a sculptor from Ohio. Other copies of the statue- called The Emperor has no Balls- published earlier this year on the streets in five cities: Cleveland, New York, Los Angeles, San Francisco and Seattle. They were there, however, soon removed by the authorities.

Click on the video to see how the statues were placed and the reactions of the audience: