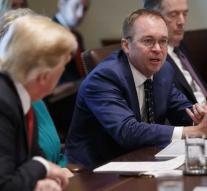 washington - US President Donald Trump will appoint Mick Mulvaney as acting Chief of Staff of the White House. He replaces John Kelly, who, according to the president, stays on until the end of the year.

Mulvaney is currently head of the management and budget department (OMB) in Washington. He becomes the third chief of staff of Trump, who announced the appointment via Twitter. The president called his departing chief of staff Kelly a 'true patriot' and thanked him for his services.