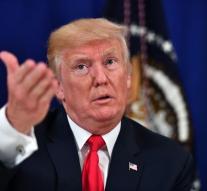 His Secretary of Defense already announced Thursday that the United States is ready to resist any threat to Pyongyang. Trump itself warned North Korea not to take military action against the United States, especially against the island of Guam in the Pacific. 'We prepare for different options. If he does anything against Guam, something will happen in North Korea that no-one has ever seen before, 'said Trump to Kim Jong-un.

The US president repeated that the US nuclear arsenal is in good condition. 'It's in tip-top condition,' said Trump. 'Nobody, that is also true for North Korea, should threaten us. 'He also announced that the US will expand its rocket defense systems. He will release a billion amount there.

The US president also said that its purpose is to free all the world from nuclear weapons. 'The nuclear threat is the largest in the world. This applies not only to North Korea but also to all other nuclear powers. But as long as this has not been achieved, the United States will remain the strongest and most powerful nuclear power, 'said Trump.