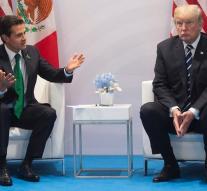 - HAMBURGThe United States make good progress on trade issues with Mexico, said President Donald Trump Friday after meeting with Mexican president Enrique Pena Nieto in the margin of the G20 summit in Hamburg. But he also repeated his promise that the southern neighbor will pay for the construction of a wall along the border.

'We are negotiating NAFTA and other things with Mexico and we'll see how it all works, but I think we've made very good progress,' said Trump. Pena Nieto, called by Trump his good 'friend', added that the meeting would help to continue a very strong dialogue on NAFTA. NAFTA is the free trade zone that includes Canada, the United States and Mexico.

Disputes about migration, Trumps announced border wall, of which Mexico says unpaid, and its claim that free trade with Mexico jobs in the US has put an end to the relations between both countries.