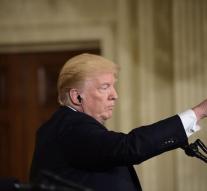 washington - The new Russian ambassador to the US has given a visit to President Donald Trump and his credentials.

Anatoli Antonov declared that he had had a 'warm and constructive' encounter with the US head of state.

'We agreed with our colleagues and staff to continue our cooperation,' said the diplomat's official language. Antonov follows Sergei Kisljak, who was in office for nine years.

The ties between countries are under pressure by alleged interference with Russia in the US presidential elections last year.