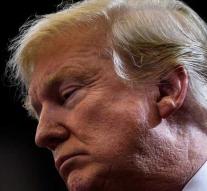 fargo - President Donald Trump wants the new member of the US Supreme Court to serve the court for at least 40 years.

'We have to choose someone who is there for 40, 45 years,' said Trump at a meeting in the city of Fargo in North Dakota. He reacted to the message that Anthony Kennedy leaves as a member of the Supreme Court.

Kennedy, a moderate conservative, was appointed in 1988 by then-President Ronald Reagan. However, in some important decisions he ended up behind liberals and made no friends in the conservative camp. So he voted for gay marriage. Kennedy will turn 82 next month and will retire at the end of July.