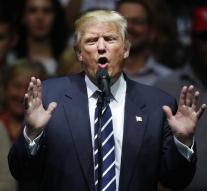 - The recount of votes cast in Wisconsin has not changed the outcome of the presidential election in the US state.

When the electoral commission Monday was almost done with her work requested by Jill Stein of the Greens, the Donald Trump margin pale compared to Hillary Clinton shrunk by only 25 voters. The Republican candidate was declared the winner in Wisconsin with more than 22 000 votes more than his Democratic rival.

Stein had requested because the election results would be affected by possible hackers. They did for Pennsylvania and Michigan. In Pennsylvania rejected the court issue a recount Monday. He found it ' bordering on the irrational '' and given the deadline (Tuesday) also totally unfeasible. His colleague in Michigan ruled Friday there all that Stein was not entitled to non-duped candidate.