Home / World / Trump: let it be an arms race 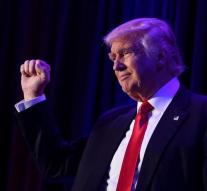 washington - Donald Trump said Friday his tweet about the strengthening of the US nuclear arsenal clarified. 'Let it be an arms race,' said the president-elect of the United States Friday against MSNBC. 'We will beat them at every step and last longer than any others.'

Trump had a day via Twitter previously informed that the US regards him as 'the nuclear capabilities should significantly expand and strengthen. 'If he adds the action to the word, that would mean a break with the past decades policy precisely to reduce the number of nuclear weapons.

Trump's spokesman later gave a very different explanation. 'Upcoming presidential Trump was referring to the threat of nuclear proliferation and the need to counteract these,' he said.

Russian President Putin, who called himself Thursday for modernizing the nuclear arsenal of his country, responded Friday quietly. He did Trumps comment off as 'nothing special' and reiterated that the Russian army 'is stronger than any potential aggressor. '