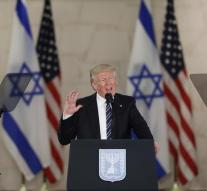 jerusalem - US President Donald Trump sentenced to the 6 million Jews killed by the Nazis at the Holocaust Monument Yad Vashem in Jerusalem on Tuesday. He, together with his wife Melania, laid a wreath on the place where the ashes of victims are buried.

'Words can never describe the bottomless depths of that evil, nor the extent of fear and destruction,' said Trump in a short speech. 'It was the darkest hour of history. It was the most cruel crime against God and His children. '

Previously, there was criticism of the attitude of the Trump government against the Jewish persecution. In a statement on the occasion of the International Commemorative Day in January, the White House forgot to mention the Jews, which formed the bulk of the victims of the Nazis.

Furthermore, White House spokesman Sean Spicer expressed himself unhappy a few times, including when he said that even Hitler had not reduced to the level of Syrian President Bashar al-Assad by deploying chemical weapons to civilians. Spicer also indicated the destruction camps as 'Holocaust Centers'.