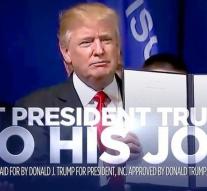 washington - The re-election campaign for Donald Trump started 'officially' on Sunday with the first commercial announcement on television. In the 30 seconds, the Democrats are being addressed and reiterated what the US President has achieved in his first seven months in the White House.

The broadcast was calculated at a time when Trump once again received a charge critically because of his reaction to the events in Charlottesville. The president himself started immediately after his inauguration on a second term by 2020.

The new video uses the same video images, photos and font as one released earlier this year by America First Policies. That's a political organization that secretly can collect and spend unlimited money. A direct partnership with the Trumps campaign team can not be said. That is prohibited by law.

In the Sunday TV show, Trump is boosted for the jobs he has created and for the rise in stock quotes. 'His enemies do not want him to be successful, but Americans say' let President Trump do his job but do. ' ''